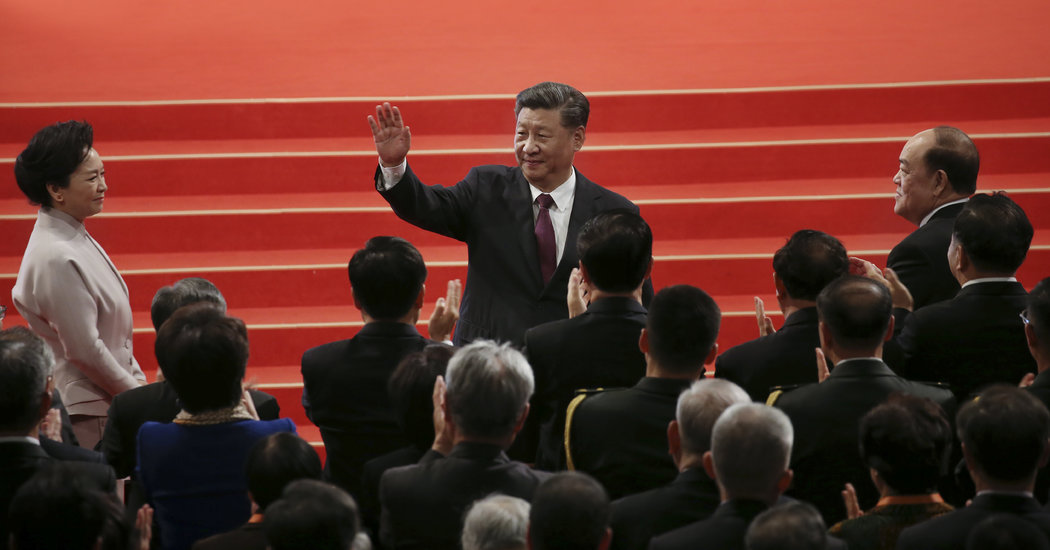 BEIJING — China’s leader, Xi Jinping, praised the Chinese gambling hub of Macau on Friday for its patriotism and delivered a veiled rebuke to nearby Hong Kong that Beijing would not allow challenges to its sovereignty or the interference of “external forces.”

Mr. Xi spoke on the 20th anniversary of the return of Macau to Chinese rule, a significant event for Beijing as it wrangles with protests in nearby Hong Kong that have evolved into the most direct challenge to Communist Party rule in decades.

The handover of Macau, the former Portuguese colony, in 1999 took place two years after Britain ceded sovereignty of Hong Kong. In the years since, the two cities have functioned as semiautonomous territories with greater economic and political freedoms — up to a limit, Mr. Xi made clear.

Mr. Xi’s remarks amounted to a warning for Hong Kong, where protests and clashes with the police have convulsed the city since June. Macau, he said, provided “a gorgeous chapter” in the history of the arrangement China calls “one country, two systems” by demonstrating its fealty to the central authority in Beijing.

“The long-term prosperity and stability of Macau will, with firm determination, never be shaken by temporary twists and turns,” he said in televised remarks at the East Asian Games Dome, an indoor stadium near Macau’s glittering casino hub, the Cotai Strip.

He warned that “external forces” sought to challenge China’s governance of the two territories. Officials have blamed the United States, Britain and others in the West for fomenting the unrest in Hong Kong as a way to undermine China.

“The will of the Chinese government and the Chinese people to safeguard national sovereignty, security and development interests is as firm as a rock,” he said. “We will never allow any external forces to interfere in Hong Kong and Macau affairs.”

Mr. Xi’s speech capped a three-day visit surrounding Friday’s anniversary and the swearing in of a new government for the territory. The new chief executive, Ho Iat Seng, who was elected in October by an unanimous vote of an electoral committee, returned the praise for Mr. Xi and the central government, saying Chinese rule was the foundation of Macau’s fortune.

The pomp and circumstance surrounding the anniversary underscored the heavy symbolism China invests in Macau and Hong Kong: territories that it feels were humiliatingly carved off by Western imperial powers and only returned to their rightful place in the motherland under the rule of the Communist Party. Mr. Xi referred to the instability and criminality that consumed Macau in the years before the handover, adding, “Macau has become one of the world’s safest cities.”

In the days leading up to the anniversary, state television and newspapers lavished coverage on the territory, citing the rising prosperity of the city’s 670,000 residents, the stewardship of the city’s leadership and most of all, Macau’s loyalty to the Communist Party state in Beijing. The comparative discord in Hong Kong always seemed to hover over the preparations.

The coverage also sought to deliver a message to Taiwan, the self-governing democracy China claims as its territory. Mr. Xi has sought to entice the island into unification with the mainland with a promise of a similar “one country, two systems” political arrangement, but the idea is largely unpopular in Taiwan.

Mr. Xi, accompanied during his visit by his wife, Peng Liyuan, a former popular singer, visited government offices and schools and viewed an exhibition at a middle school about “patriotic education” in Macau, which means using textbooks produced in the mainland under strict Communist Party supervision. On Thursday, he also met with commanders and officers of the Macau Security Forces inside the East Asian Games Dome.

During a gala dinner on Thursday, Mr. Xi praised Macau repeatedly. He cited new efforts to build new housing, a pressing problem in the tiny, crowded territory only 12 miles square, and the passage of national security laws that made subversion against the Chinese state a crime. Hong Kong failed to adopt a similar law after mass protests in 2003 and has yet to take up the issue again, much to Beijing’s frustration.

Macau’s government and “people from all walks of life are well aware that ‘if the family lives in harmony, all affairs will prosper,’” he said referring to Macau’s official status and using a familiar Chinese aphorism. “And amiability leads to harmony, stressing unity and consultation, not internal friction.”

The central government also offered several new benefits to Macau. One was an increase in the daily limit for remittances from Macau to the mainland to $11,400 from $7,100. The new limit in Macau would match that set for Hong Kong. It had been kept lower because of concerns about money laundering linked to the gambling industry. The Chinese state-run broadcaster, CCTV, also announced that its all-sports channel would begin broadcasting in the territory.

Security around Mr. Xi’s visit was intense. The authorities suspended service on a newly opened elevated light rail in Taipa — only days after it opened — and border guards turned away a number of journalists and others as they tried to enter the territory from Hong Kong, presumably because they wanted to ensure a protest-free celebration.