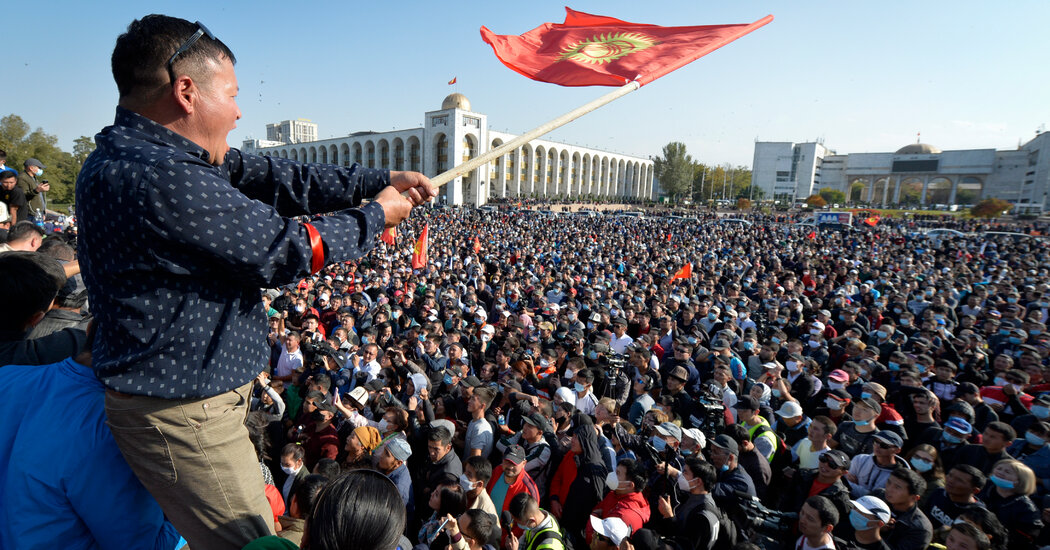 BISHKEK, Kyrgyzstan — Protesters clashed with the police in Kyrgyzstan’s capital, Bishkek, on Monday during a demonstration against the results of a parliamentary election, with dozens of people reported injured.

Local reports said at least 590 others had been injured. One news outlet reported at least one fatality.

Early results in the election gave the majority of votes to two parties with ties to the country’s ruling elites amid allegations of vote buying.

Later, an opposition politician who proclaimed himself the acting Kyrgyz prosecutor general suggested that the election result would be annulled, according to local news media. Reports said that 12 parties had signed a document demanding that the authorities cancel the results of the election and hold a new one.

“We all have witnessed a true lawlessness during the election campaign and the Election Day yesterday,” said Klara Sooronkulova, leader of the Reforma opposition party. “Pressure on the voters, intimidation of the voters, bribing.”

The election-monitoring body of the Organization for Security and Cooperation in Europe said in a report on Monday that “fundamental rights and freedoms were overall respected” in this year’s election in Kyrgyzstan, but that “credible allegations of vote buying remain a serious concern.”

Local news outlets estimated that about 4,000 people took part in the rally in Bishkek, with smaller protests taking place in two other Kyrgyz cities.

One video of the protest in Bishkek showed a group of young men trying to break through the gates of a government complex that houses both the Parliament and the presidential office.

The police moved to disperse the crowds in the evening, using water cannons, tear gas and flashbang grenades.

In the early hours of Tuesday, protesters succeeded in breaking into government and state security headquarters, the local news websites Akipress and 24.kg reported, according to Reuters. The protesters then freed an ex-president, Almazbek Atambayev, and a few other former senior officials, according to the local reports.

Preliminary results of the Sunday election, reported on Monday evening, showed that only five parties out of 16 featured on the ballot won seats in the Kyrgyz Parliament.

The Birimdik party, which is considered pro-government, received over 26 percent of the votes. The Mekenim Kyrgyzstan party, linked to a former top customs official, won over 24 percent. Three other parties have passed the 7 percent threshold to gain seats in Parliament.

According to news reports, the unrest in Bishkek continued well into the night. Late Monday, the winning Birimdik party said it was ready to take part in a new election, should one be scheduled, and urged other parties who won seats to do the same.

President Sooronbai Jeenbekov of Kyrgyzstan called a meeting for Tuesday morning with leaders of all 16 parties.